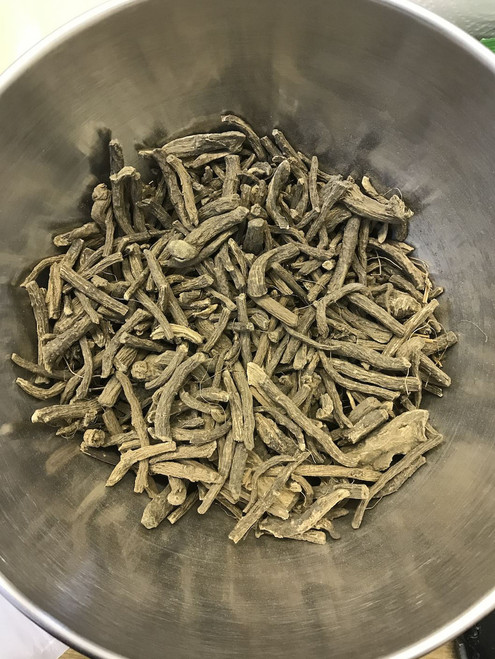 Take this herb alongside Ashwagandha and Kaunch Beej (Mucuna Pruriens) powder for proper management of ED altogether and sustain erection for longer duration.

The powdered root of Akarkara is extremely beneficial in inhibiting the growth of cavity-causing bacteria in the mouth. Not only does prescribed use of akarkara help in treating bleeding gums and healing minor wounds but also helps in cleansing the mouth, enhancing salivation by improving secretions in the gastrointestinal tract. Be it swollen gums, gingivitis, or pyorrhea the roots of this incredible herb play a crucial role in maintaining good oral hygiene. The tincture made from the dried root can be applied using a cotton wool or rubbed on the gums to relieve the aching of a decayed tooth.

This powerful formulation holds high value in improving the general stamina and energy level of the body. The active ingredients in this herb reduces weakness and fatigue and improves the vitality of the body. It also improves the function of the adrenal glands which in turn helps in reducing the stress levels.

Childhood apraxia of speech (CAS) is an uncommon speech disorder in which a child has difficulty making accurate movements while speaking. as the speech muscles don't perform normally because the brain has difficulty directing or coordinating the movements. Akarkara being a nervine and brain tonic, helps in treating this condition slowly.

A gentle massage of the tongue with 125 mg of Akarkara root powder mixed with honey helps improving speech in children. Its effects increases further when 125 mg Vacha (Acorus Calamus) is also added in this mixture.

Akarkara offers a one-shot traditional remedy for boosting libido and improving fertility in men. It showcases strong aphrodisiac properties that not only helps in reducing mental stress and anxiety but also stimulates the production of testosterone that increases fertility and libido. It plays a key role in increasing virility and stamina in men. Consuming formulations of akarkara alongside milk before sleeping has been known to increase blood circulation in the genitals which thereby improves the production of male hormones like testosterone and luteinizing hormone, thus improving the motility and quality of sperms in male.

The abundance of anti-inflammatory and anti-arthritic properties of Akarkara makes it the ultimate choice for providing relief from pain and inflammation due to arthritis. Being a natural vasodilator, it is also used to treat painful muscle spasms, sore muscles, arthritic conditions, and other inflammatory situations. Application of powdered paste of it’s root is extremely effective against Rheumatoid arthritis which is known as Amavata in Ayurveda, an ailment that stems due to the vitiation of Vata doshas and accumulation of Ama in the joints.

Akarkara, that goes by the botanical name Anacyclus  pyrethrum, is a small perennial plant belonging to the Asteraceae family. The plant is mainly native to Arabia, and distributed widely in North Africa, Mediterranean region, Spain and India. In the Indian subcontinent, it is found along the Himalayas, in Jammu and Kashmir, Bengal and in other Northern regions. This herbaceous perennial plant resembles a lot like chamomile species in habitat and appearance. It thrives well in alpine regions and rocky gardens.

Akarkara is a small, hairy, stem less, herbaceous plant of perennial origin that normally grows to about 3-4 feet. Roots of this plant are almost cylindrical, tapering and often coffered with a tuft of grey hair. It usually exudes an aromatic odor with a pungent taste. From the outside, the roots are brown and wrinkled, with bright black spots. The plant has numerous stems with downy branches that lie on the ground and rise erect towards the ends. Each of the stem mainly bears one large flower, with a yellow-colored disk.  Leaves are alternate, smooth and pinnate in shape. They are pale green in color with deeply cut segments. The beautiful blooms have white colored petals with purple tinge beneath. Fertile flowers are followed by obovate achene.

Although, the exact biochemical composition of anacyclus pyrethrum is not well known, yet some studies suggest that akarkara root contains alkaloid pellitorin (pyrethrin) and alkyl amides. Alkyl amide in the akarkara roots is chiefly made of tyramine amides and isobutylamides. Alkyl amides have libido stimulant and neuroprotective properties.  The aerial parts of akarkara plant mainly contain anacyclin. Other active constituents include inulin, sesamin and hydrocarolin.

Enriched with potent biochemical components and incredible therapeutic properties, Akarkara offers a traditional herbal remedy for various health anomalies. Be it in the form of churna, kwath, gutika, lehyam, rasa or tailam, the magical benefits of the incredible Pyretheum can be employed via all. One such incredible ayurvedic formulation containing Akarkara is Divya Yauvanamrit Vati.