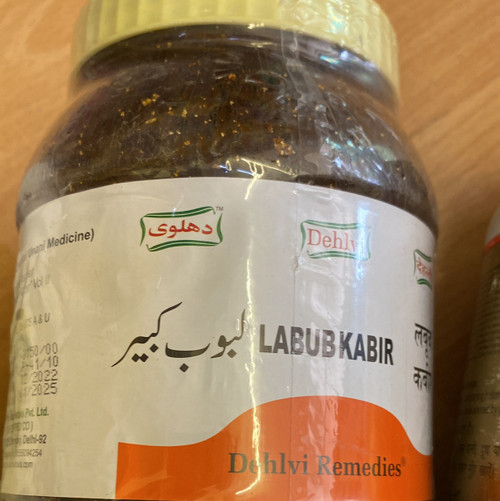 Hamdard Labub Kabir: It helps to give strength to brain, nerves and the muscles of the male sex organ.Improves Vigour and Vitality.Increases Sperm Count and checks spermatorrhea.It removes general and sexual debility.

Labub Kabir can be used to treat male impotency caused by a low sperm count or reduced testosterone levels. It increases the production of male sexual hormones, testosterone, and thus, helps to increase the sperm count and sperm motility. It also improves the sperm quality and increases the chances of successful fertilization of sperm and ovum resulting in pregnancy in the female partner.

Labub Kabir can be used in the treatment of sexual difficulties in men like erectile dysfunction, and premature ejaculation. It strengthens the vital organs and nerves in the body and increases the overall health, fitness, and vigor of men thus allowing them to overcome the sexual difficulties naturally without the need of using any chemical-laden drugs. It is specially used to improve the hardness of penis. It works by increasing the surge of blood into the penis, which results in an erection. It also strengthens the muscles of the penis thus preventing premature ejaculation. It checks spermatorrhea and reduces general and sexual debility. It can also be used to treat seminal emission.

Dosage: 5 grams (1 teaspoon) to be taken before breakfast and before sleep at night with warm milk.

Side effects: Labub Kabir is a safe to use OTC medicine made by Unani Herbal formula and is not know to have any side effects. It is known to give strength to the body for fighting weakness.

PRODUCT HIGHLIGHT: It helps to give strength to nerves,brain and the muscles of the male sex organ.Improves Vitality and Vigour.Increases checks spermatorrhea.

Consult your Physician before taking this product