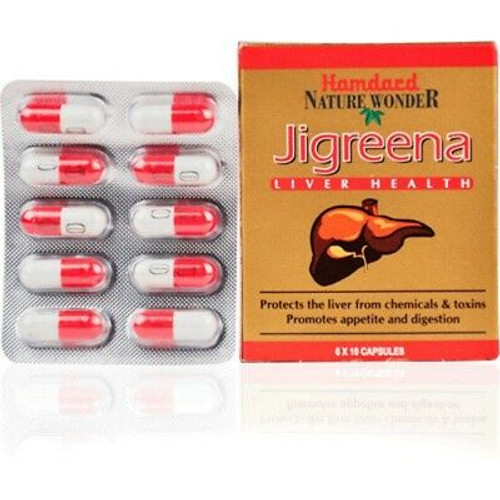 The main indication of this medicine is a liver tonic.

It is also beneficial in low appetite, weak digestion, and liver diseases.

It promotes appetite, and digestion.

It has mild purgative, laxative, astringent, Tonic, stomachic, aperient, Tonic, diuretic properties, and used to treat fever, cough, indigestion, menstrual disorder. Rheum emodi is a mild purgative, astringent, Tonic, laxative, stomachic, and aperient. It is also reported to be a potent anti-inflammatory drug. Rheum emodi has hepatoprotective action. The ethanolic extracts of Rheum emodi rhizome have been evaluated by scientific studies. Carbon tetrachloride administration caused a significant increase in the serum activities of AST, ALT, and ALP, and a similar increase in the total bilirubin in rats. Oral administration of Rheum emodi at 3.0 g/kg significantly decreased the above-elevated parameters, and the normal structure of the liver pattern was restored. Another similar study has confirmed the hepatoprotective effect of aqueous extract of Rheum emodi against liver damage induced by paracetamol in albino rats. Rhubarb is contraindicated in cases of acute inflammatory intestinal diseases, intestinal obstructions, appendicitis, and abdominal pain of unknown origin. Rhubarb is contraindicated during pregnancy or lactation, in renal disorders, gout, and rheumatism. Potassium deficiency can cause an increase in the effect of cardiac glucosides. Its use is prohibited for the patients suffering from gout, rheumatism, epilepsy, and uric acid troubles, and for people with a history of renal or gall bladder stones. The rhizome contains some oxalic acid, which, when consumed, can combine with calcium in the blood to form insoluble calcium oxalate crystals that may be deposited in the kidneys or gall bladder. It is not fitted for inflammatory or febrile cases although it seldom acts as an irritant. When given internally, the roots impart a deep tinge to urine. Mugwort (Artemisia vulgaris) Mugwort roots are used in combination with other herbs for psychoneurosis (feelings of anxiety, obsessional thoughts, compulsive acts), neurasthenia (fatigue, headache, and irritability, associated chiefly with emotional disturbance), depression, hypochondria (health anxiety or illness anxiety disorder, refers to worry about having a serious illness), general irritability, and restlessness, insomnia, and anxiety. Mugwort may cause abortions or allergies. Symptoms of an allergy include breathing problem, rashes, hives, eye swelling, sneezing, lips swelling, etc. Bhringraj Eclipta alba, Eclipta prostrata, or Trailing eclipta, is commonly known as Bhringraj. The aerial parts of the plant contain terthienyl derivatives, including a-formylterthienyl, and a number of esterified 5-hydroxyterthienyl derivatives, flavonoids apigenin, and luteolin, and the isoflavone orobol, wedelolactone, and desmethyl-wedelolactone. Taste/Rasa: Bitter/Titka, Pungent/Katu Quality/Guna: Light/Laghu, Dry/Ruksha Potency/Veerya: Cooling/Shita Post Digestive/Vipak: Pungent/Katu Dosha: Balances Vata-Pitta-Kapha, Mainly Reduces Vata And Pitta Tissue/Dhatu: Plasma, Blood, Bone, Nerve In some texts, it is mentioned heating, but in more modern texts it is considered to be cooling. In Ayurveda, Bhringraj is used both internally, and externally. It is mainly known for its use in hair care, and the making of hair oil. But it is an important herb for liver, and blood-related diseases. It helps in Viral hepatic enlargement with biliary stasis, cirrhosis, infectious hepatitis, and jaundice. It is Hepatic deobstruent, and tonic. Bhringraj acts as a deobstruent to promote the flow of bile, protecting the liver parenchymal tissue in viral hepatitis, and other conditions involving enlargement of the liver. The fresh juice of the leaves is used to improve the appetite, and to stimulate digestion. Biomedical Action Anti-inflammatory: Reducing inflammation by acting on body mechanisms. Deobstruent: Removing obstructions; having the power to clear or open the natural ducts of the fluids, and secretions of the body. Depurative: Purifying agent. Diaphoretic: Promote sweating. Diuretic: Promoting excretion of urine/agent that increases the amount of urine excreted. Emmenagogue: Stimulates or increases menstrual flow. Hepatoprotective: Prevent damage to the liver. Laxative: Tending to stimulate or facilitate the evacuation of the bowels. Stomachic: Stimulates gastric activity.

Jigreena Health Benefits It stimulates bile secretion, and thus supports better appetite, and digestion. It increases peristalsis, and thus gives relief in constipation. It has a diuretic action. It cleanses the liver. It increases circulation. It is tonic for the liver. It cleanses the body by flushing out the toxins due to its diaphoretic, diuretic, and laxative action. It supports better functioning of the liver. Jigreena Therapeutic Uses Jigreena is used for diseases of the liver, and as a liver tonic. Alcoholic liver disease Poor appetite, and digestion. As an adjuvant with hepatotoxic drugs Jigreena Dosage

The recommended dosage of medicine is 2 capsules. It should be taken twice a day, in the morning, and evening. It is to be taken with water. Or take as directed by a doctor.

Suggestions Effectivity of herbal medicine depends on many factors. A medicine suitable for one person may not essentially give the same result in another person. Do check the list of ingredients, and their contraindications to avoid any side effects. If symptoms do not improve or worsen, consult a doctor. Contraindications Specific contraindications have not been identified. Avoid in the high Pitta with heartburn, ulcers, and sweating. Drug Interactions Please maintain a gap of at least an hour between intake of any allopathic drug, and Ayurvedic medicine to avoid drug interaction, if any. Do not use many different medicines for the treatments of the same disease. Mugwort may have a drug interaction with antimalaria, antidiabetic medicines, and salicylates. Mugwort interacts with anticoagulant medicine or aspirin, and increases clotting time. Side-effects No health hazards or side effects are known in conjunction with the proper administration of designated therapeutic dosages. Since it is hot in potency, and increases pitta, an excess dose may cause a burning sensation. It stimulates bile secretion, and thus may cause acidity, heartburn, acid reflux, dizziness, etc. Warnings Do check the list of ingredients, and their contraindications to avoid any side effects. Do not use any medicine during pregnancy without consulting doctor. Storage Store in a cool, and dry place in a tightly closed container, protected from light, and moisture. Keep away from the sight, and reach of children. Keep bottle cap closed after every use. FAQs About Jigreena Is it safe to take Jigreena? Yes, it is safe to take Jigreena in the recommended dosage. What is the Chief Indication of Jigreena? The most common use of this medicine is a liver tonic. What is Effect on Vata-Pitta or Kapha? Vata Reducing. Pitta Increasing. Kapha Reducing. Does it contain non-herbal ingredients? No. How long can I take this medicine? You may take it for 1-2 months. What is the Best time to take Jigreena? It should be taken before a meal. Try to take at the same time daily. Is Jigreena a habit-forming medicine? No. Is it safe to drive while taking Jigreena? If a person feels side effects such as drowsiness, dizziness, hypotension, headache, or any symptoms affecting mental alertness, he or she must not drive or operate heavy machinery. Can I take it during periods? It can be taken. Avoid during periods, if you feel any effect on bleeding pattern. Can I take it during pregnancy? No. It stimulates uterine, and causes contraction. Can a diabetic person take it? Yes. Can I give it to children? It is always recommended to consult the doctor to know the exact health issue, and correct dose.